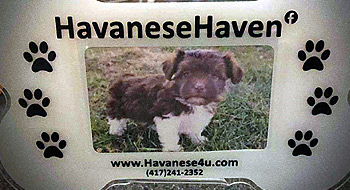 You have probably seen many ads by now as you look for that special puppy. There are many very nice puppies out there, but choosing the right one is difficult if you do not know how they are raised. 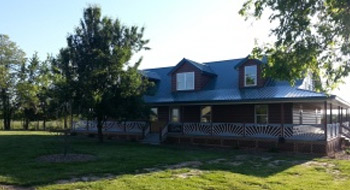 Handle your new puppy often during the first 3 days. They have just been taken from the only family they have ever known and will need to re-bond with you.

The Havanese is a small, sturdy dog with a friendly disposition. His wavy, silky coat is profuse, but remains extremely light, insulating and protecting the breed against harsh tropical heat. His coat, which comes in all colors, should remain untrimmed. The Havanese’s popularity in the show ring has grown quickly, and they are also now high in demand as a family pet.

The Havanese is a descendent of breeds brought to Cuba from Spain and could also be related to the Tenerife, an ancestor of the entire Bichon family. Once known as the Havana Silk Dog and the Spanish Silk Poodle, the Havanese evolved from its role as a pampered lap-dog of the aristocracy into a family companion responsible for being a watchdog, child’s playmate and herder of the family’s poultry flock.

Right Breed for You?

The Havanese is trainable and intelligent and possesses a naturally affectionate temperament, which making the breed an ideal family pet. Although a toy dog, they remain energetic and require some form of daily exercise. The breed’s non-shedding coat makes it suitable for allergy sufferers, but regular grooming is necessary to keep the coat in top condition.

Playful and alert. The Havanese is both trainable and intelligent with a sweet, non-quarrelsome disposition.

Faith and Fresco came from Havanese Haven. They are very happy in their home with their new owners the Darby girls! Thank you so much for sharing this video with us!

We surprised my mom with a new puppy because our old dog passed away. Watch this video to see her reaction to getting a new puppy! Thanks a ton for watching!

The Havanese, new to the AKC, is an old breed with title to a colorful history. The Havanese is the National dog of Cuba and its only native breed. The dog’s journey to Cuba most likely was aboard the trade ships sailing from the island of Tenerife chronicled in ship’s logs of the early sixteenth century. Cuban trade was highly restricted by the Spanish, for many years allowing Tenerife to be one of the only open ports, and it would appear these little dogs who had found their way into homes of Cuban aristocracy developed without much outside influence.

The tropical environs of their homeland appears to have influenced the Havanese development, specifically their unique coat texture. Once called the Havana Silk Dog, or the Spanish Silk Poodle, the coat is like raw silk floss, profuse, but extremely light and soft, insulating and protective of harsh tropical rays.As Colonial Cuba developed and prospered the popularity of the Havanese grew. By the mid-eighteenth century they were trendy in Europe, often exhibited in European dog shows and type was well established. As Cuban culture shifted the little dog of Havana, adaptable as always, became a family dog extraordinaire, playmate of children, watchdog, and herder of the family poultry flock.With the advent of the Cuban revolution, the class of Cubans who owned Havanese was the first to leave. A handful of them found their way to the United States, and by the end of the 70s a gene pool was being rebuilt. All the Havanese in the world today, save those from the “iron curtain” countries and those remaining in Cuba, stem from 11 little immigrants. Remarkably, through all their travels, Havanese type and purpose has remained virtually unchanged for the past hundred and fifty years.

For more information please visit: AKC.org or Havanese.org
The information provided was obtained with permission from AKC.org website.