Well, our Zippy is now about 9 1/2 months old, and is well into his “teenage” stage. He has found is voice and doesn’t hesitate to use it to tell me (demand) what he wants. He’s still loving and can always be found next to someone on the couch. He has discovered that my husband can be fun so now they are great friends. I think the peanut butter and cheese also helped the friendship along. Zippy has suddenly discovered a love of his food, and since he now wolfs down every meal, he is up to 15 pounds. He doesn’t seem to be overweight, just overly long. I didn’t expect him to be so big since you said that his parents were smaller, but I guess that’s what good food will do. My own children are certainly taller than I am. I think he is part kangaroo because he can now jump on my daughter’s bed without help.

Zippy and I are in the second puppy class and he does very well in the class. As long as I have treats he does everything perfectly. Home is another thing, but I’m still working on it. Zippy has no fear of other dogs and tries to play with Doberman puppy who likes him too.

I hope you, Trina Gail, and the rest of your family are well. Covid cases are beginning to go up around here but thankfully all is well with my family and friends. We continue to take Zippy on hikes in the park and social distance from other people. Zippy is a hit with everyone everywhere he goes.

I’m including some pictures to you can see how he is doing. It’s hard to believe he’s been with me for 7 months! 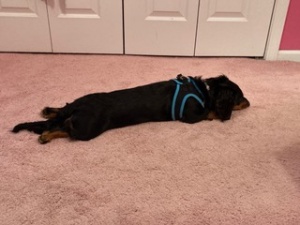 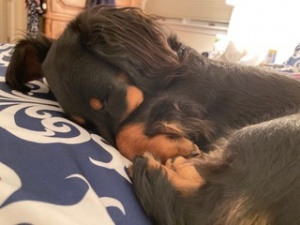 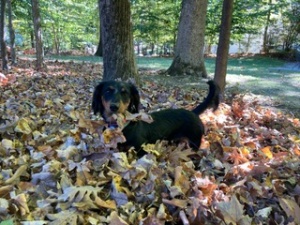